Zadoh County belongs to the Yushu Tibetan Autonomous Prefecture, in the southwest of Qinghai Province. Also spelled “Zadoi” or “Zaduo” on official government maps, the county is one of six belonging to Yushu Prefecture. According to a 2003 estimate, about 40,000 people live in all the six counties, spread over a vast mountainous terrain of more than 33,000 square kilometers. According to 2005 figures, more than 97% of people living in the six counties are Tibetan. The town of Zadoh, the largest in the county, has about 8,000 people.

Zadoh was once part of the old Tibetan province of Kham. The Khampa people are known to be strong and proud, and they lived a nomadic life herding yaks and sheep on the vast grasslands. Deeply religious, the people support many monasteries throughout the region. Gaden Relief’s first project was the reconstruction of Zuru Monastery near the town Zadoh.

Zadoh County has few health care facilities to meet the basic needs of the people. The health problems are poverty-related and include: tuberculosis, glaucoma, heart disease, kidney and bladder stones, appendicitis, gall bladder and stomach upset, rheumatism, hepatitis, arthritis, swelling of the feet. Many young babies die from diarrhea and dehydration and 30% of newborn babies die. In 2001, recognizing the dire need for more health care facilities, Gaden Relief sponsored the establishment of the Jamseng Health Clinic in Yol Nin Gar, two hours from the town of Zadoh.

Another monastery we helped support was Tashi Lhapug, a very old Gelugpa monastery blessed by the Fifth Dalai Lama. Located on the bank of the Mekong River, 300 km northwest of Zadoh, there was no road to it and no modern amenities such as electricity. Gaden Relief sponsored the installation of solar panels and now there is electricity. Gaden Relief also helped to build a new hall for philosophical debate and helped to restore the main temple.

Near the town of Zadoh is a seniors home where twenty old women lived in very poor conditions. They lived in tiny rooms with mud floors, no windows and no heat. When we learned the deplorable conditions these seniors were living in, we decided to help by raising money to buy clothing, bedding, and food. The Gaywa Seniors Project was very successful, helping more than 20 seniors who otherwise would have had no one to look after them. 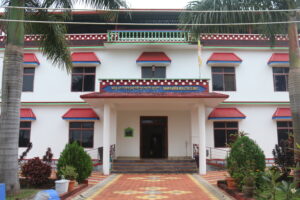